When Life Skills Teacher Nora Yasumura and Director of Student Health and Wellness Lauren Frankenbach attended the Student Diversity Leadership Conference (SDLC) with students in April, they had the opportunity to hear the keynote speaker, Dr. Howard Stevenson, who spoke about racial literacy in independent schools. He focused on school climate, fostering a sense of belonging, and the health issues related to talking about or not talking about the elephant in the room.
In an article written by Stevenson and a colleague entitled “Engaging the Racial Elephant,” the authors explain: “What is the elephant? …it is the unacknowledged silence about the racial disparities in the school climate….” Stevenson, who is the Constance Clayton Professor of Urban Education; Professor of Africana Studies, Human Development and Quantitative Methods Division at the Graduate School of Education at the University of Pennsylvania, tackles the tough work of helping school leaders face the sometimes ignored racial biases in schools. This work is clearly a family affair as a group from IMS had the privilege to hear his brother, Bryan Stevenson of the Equal Justice Initiative, speak at the People of Color Conference last December.

The description of Howard Stevenson’s keynote at the Student Diversity Leadership Conference stated: “Despite our best efforts to avoid the subject, much like ignoring the elephant in the room, racism and racial stereotyping continue to haunt American society—and American schools, particularly predominantly white schools. Racial stereotypes, Dr. Stevenson explains, undermine the quality of relationships between students and their teachers and among students within the classroom, and lay the groundwork for the academic underachievement that helps gives rise to the stereotypes in the first place.” 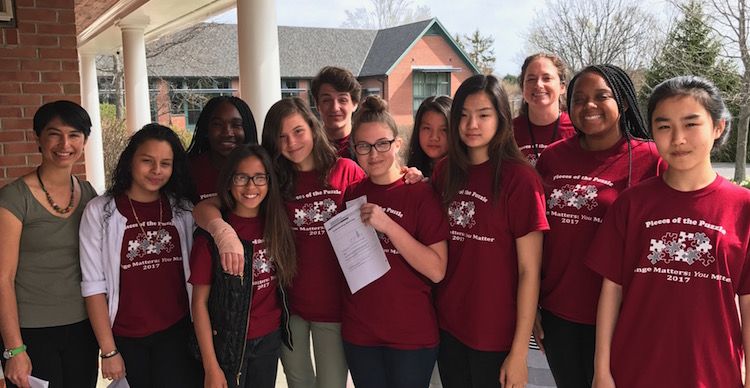 At the annual SDLC, more than 600 students gathered at the Loomis Chaffee School from independent schools around the state to explore issues of race, diversity, inclusion and identity. Eleven IMS students and two faculty members joined the conference for the 15th consecutive year.

While there they ran into a few IMS alumni who were participating in the conference. Walter Krissel ’16 is attending Loomis and was part of a jazz trio that opened the conference. Drew Laz-Nwokeafor ’15 is attending Kent and was a Peer Facilitator for the conference. Talibah Alexander ’15 is at Pomfret and was also a Peer Facilitator. The students who ran the workshops participated in 10 hours of training to be facilitators. Says Mrs. Frankenbach, “They all seemed to be doing well at their schools. It was great to see them in some leaderships roles at the next level.”

After pausing to take a good hard look at the elephant in the room, the student diversity leaders from IMS hope to bring back their information, knowledge, and experience to better the school community.